Trouble with the Mobile Phone 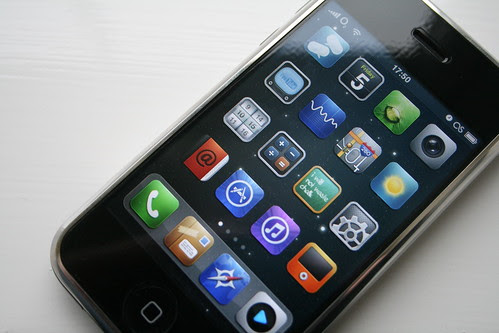 I am going to share with you a role play I created a while ago.

I don't know what gave me the idea. Must have been the fact that my students constantly forgot to turn off their mobiles. There was this one student... The class started at four o'clock. His phone always rang at 4.30. He would try to hide under the desk and he would say in this loud, hissing whisper "I'm in class. I'll call you later." They informed me afterwards that he had this really jealous girlfriend.

Or maybe it was another student who ran a multi-level marketing business. Her phone rang several times during the class and I somehow managed to teach her to go outside while she talked to her clients.

Anyway, I had a long break between two classes and that's when the idea hit me. I could see the following bit of news in my head: 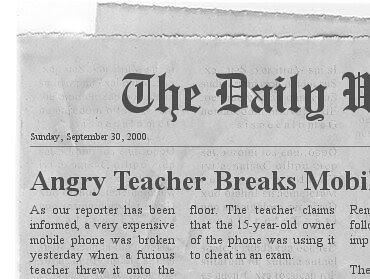 I wrote it down. I had some empty library cards in my handbag, I was doing a project or something, I can't remember. Anyway, haven't I told you that it's always useful to have things in your handbag? You never know when you are going to need library cards, for example.

So I took those cards out of my handbag and I wrote the roleplay onto them. I put the cards into my handbag (you never know when you are going to need stuff) and went into the next class.

The last class that day was with a very lively and creative group of intermediate students. We opened our books and started doing whatever we were supposed to do that day.

I don't remember what the topic of the class was, but I still remember the blank expression on their faces.

I pulled out my handwritten role cards. You really never know when you might need stuff. I explained about the angry teacher and about the phone. I spread the cards onto a desk and let each student pick one.

They screamed at each other. They argued. They negotiated. They went on and on for about an hour. They reached a compromise. I didn't have to do anything, except sit back and enjoy.

It was a magical experience.

It never happened again quite in the same way, of course. Still, whenever I did my little role play, the students liked it.

It had to evolve over years. What started as a discussion over how old children should be before they get their first mobile and whether mobiles should be allowed at school at all changed into how we could use mobiles in a constructive way in class. Some characters left the play (teachers who were firmly against mobiles at school and students whose parents couldn't afford to buy them mobiles) and new characters replaced them (the under-cover journalist and the geeky teacher).

The procedure for this lesson is really simple and you can improvise as much as you want.

I would start by asking them whether they had ever been in an awkward situation because they had forgotten to turn off their mobile. That serves a double purpose - it introduces the topic and it reminds them to turn off their phone in case they haven't already done it. Then they can talk about the mobile they are using at the moment, the mobile they would like to have... It depends on how much time you have.

After that, introduce the topic of the lesson. You can simply read out loud the bit of news about the angry teacher, or you can download it here, cut it into little strips of paper and give it to them. Ask them to discuss what might have prompted the teacher to do that. Ask them to try and predict what is going to happen.

The main part of the lesson is the role play which you can download here. Cut it into role cards and give each student a card. There are nine roles in the play, but it can easily be adjusted to suit your class. The first four roles are crucial (the student's parent, the principal, the student and the teacher) and if your class is small you can choose who else you want to keep. Some roles can be repeated (the journalist, the student's friend, the teacher's friend...). If your class is large, you can put the students into groups of nine.

By the way, you might want to pre-teach the language for agreeing and disagreeing and (why not?) a couple of taboo words.

As a follow-up, you can discuss various ways in which mobiles can be used in class in a constructive way. There are tons of great blog posts on that subject. This one, for example. And here is a nice vocabulary test connected to this topic.

And if, like me, you teach in a country where geeky teachers are an endangered species, you might enjoy this little video (which is not a part of the lesson plan, but, shall we say, a freeby). So, sit back and enjoy:

If you decide to try it with your students, do let me know how it went. Just post me a note in the Comments section. I have only ever done this with adult learners and I am really curious about what would happen if you gave it to teenagers.

And, in case you got so carried away by my elegant prose that you somehow missed the download links for the worksheets, here they are once again:

This lesson plan by http://lunas994.blogspot.com is licensed under a Creative Commons Attribution-Share Alike 3.0 Unported License.

What a wonderful lesson plan! I look forward to using this the next time I have a class. Many thanks Natasa!

PS You've used the Newspaper Generator to great effect. I also love using it and have created an article today!

Thanks, Janet. Do let me know how it went. I learnt how to use the Newspaper Generator from you. I saw it in your blog and liked it:)

Great to read your blog. My students used xtranormal.com to present their haikus. It was a refreshing new way to publish their work. We had so much fun watching them!

Welcome, Emily. I love the idea of presenting haikus in Xtranormal. I would like to try something similar with my students. Thanks for sharing.