Update (2018): If you have landed on this page from the Let's Go Digital website, you might be confused about the tools I used to create these comics. Unfortunately, Bitstrips and Superherosquad don't exist any more. The Bitstrips people are still offering something called Bitmoji, which (although nice) is a far cry from its original. If you are looking for a comic creator, there are still a lot of free options out there, such as Toondoo. Superheromachine is still out there, luckily.
I have decided to keep this post as it is, instead of republishing it, since it still contains a lot of practical ideas for the classroom. The post was written a long time ago and it was a part of a blogging challenge I participated in back then. I am going to keep the posts related to the Free Tools Challenge very short, so that I can explore as many tools as possible and somehow catch up with the challenge.

Let's say you want to create a comic with or for your students. Why should you choose Bitstrips? Because they are really, really easy to use. Because they are flexible. You can create your own comics in seconds using the ready-made characters. Or you can spend five minutes more and create your own character. For the first activity I am going to share here I created a silly pink-haired girl called Jane. I liked Jane so much that I starred her in the other two comics I created. 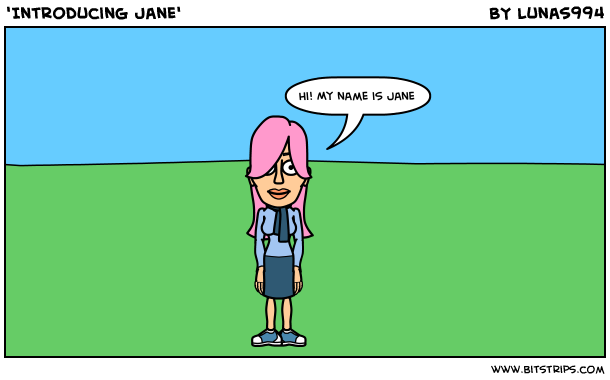 It is easy to position the characters, to change their facial expressions and their gestures. I am usually puzzled by comic creators, but Bitstrips are very intuitive.

I promised in my first Free Tools Challenge that I was going to keep these posts down-to-earth and full of practical activities. Then why do strange winged ladies keep appearing on this page?

Well, see, I kind of got carried away and, along with Bitstrips I used several other tools, such as Hero Machine (great for creating comic superheroes), Superherosquad (for comics, really easy) and Marvel.com (again for superheroes). It so happens that all my heroines have wings. I would love to share them all here (I have created a whole bunch of them), but there is no space. I am somehow sure that they'll keep cropping up in my future posts.

Now for my Bitstrips activities. Practical and down-to-earth. Just like Jane, who hasn't got wings at all.

There are lots and lots of ways you can use comics in class. I have, yet again, focused on three:

1. to introduce new grammar and vocabulary or provide further examples

You could, of course, just write the examples on the board, but isn't this much more interesting?

Try to make your comics funny if possible. Don't forget to change your characters' expressions and positions according to what they are saying.

Bitstrips are great for vocabulary and especially for idioms. Have a look of what Janet did here.

In the following activity I used a letter of complaint where a customer was complaining about something that had happened to him in a supermarket and then I 'dramatised the scene' in the comic:

This is just an example, but it is possible to develop it into a full lesson plan. First you can work on the difference between formal and informal English with your students, then you can work on the language of complaining. After that they can compose a letter of complaint and finally they could create a Bitstrips comic. There is even room for a role play in between.

Or the process can be reversed. First they think of a real situation, then they create a Bitstrips comic, finally they write the letter.

3. In the third activity I have provided the strip, but no text. I am sure you are familiar with this type of writing activity. Usually speech bubbles are provided, but I haven't done that here. That way there is more flexibility. Who is speaking? Is the cat saying anything? What are the characters saying?

Thanks for sharing. I'll link back to your post soon!!

Thanks Janet. I am glad you have found my activities useful. As for the winged characters, they are addictive. I have just created another one. I guess I am just procrastinating, but it is fun.

I'm confused about the "free" bit. Last time I checked Bitstrips you had to pay?!? What am I missing?
:-)Karin

Karin, you are right - Bitstrips for School (http://www.bitstripsforschools.com/) are not free. Which is precisely why I decided to use ordinary Bitstrips instead. Because ordinary Bitstrips (http://www.bitstrips.com/) are still free. True, you are missing the 'classroom feeling' you have with Bitstrips for School, but you and your students can still find ways to share the comics you created.
I have used a lot of online tools and so far I haven't spent a penny on any of them. If something is not free, I ignore it:)