My Blog is Ten Years Old 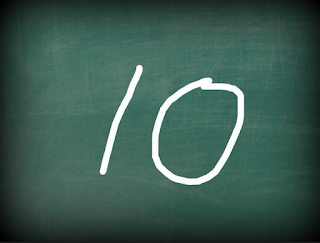 I started this blog ten years ago on this very day. I had just bought my first internet-enabled computer (back then the digital divide was a real thing and Serbia was really lagging behind other countries). The whole wide world was opening before my eyes and that's when I joined my first two EVO sessions. One of the sessions I had joined was Blogging for Educators and, with the help of the moderators, I started this blog. It was January 2008.

I have always liked writing, so I quickly became passionate about blogging. Back then, many English teachers were. There was a whole network of bloggers and we supported each other. Then, one by one, we got a little tired. A lot of us started blogging less and less often. To me, this happened gradually and I was in denial for a long time. No, my blog was doing fine, no, I was still passionate about blogging, I just didn't update as often any more. Several times I declared that my blog was out of hibernation, that I was back. Then, some two years ago, I had to admit it to myself: I had given up blogging, maybe for good.

This wasn't happening to me only. Others were giving up blogging and some blogs I enjoyed reading were no longer being updated. I am talking about English language teaching blogs here and I am not generalising. The blogs I have in mind are the ones that originated around 2008, more or less at the same time as mine. We were just tired, I suppose.

Then, about a month ago, Janet Bianchini brought her blog back to life. Janet and I have been blogging buddies for a long time now. We have encouraged each other with comments and kept each other going. When Janet stopped blogging, I told myself that it was OK to stop too. But now her blog is back and thriving, so I have no more excuses not to do the same. I have promised Janet I would get back to blogging. Also, I believe if a blog has been online for ten years, it deserves to be treated well. So, here I am. EVO sessions are back and I always have so much to say during EVO sessions. I have some other ideas too (I have basically planned my next few posts), but more about that later. I even have an idea about another blog I would like to start (maybe next summer, during the holidays) and it will be something completely different from what I have been doing so far. I will say no more except that this new blog will not be about English language teaching at all. And, of course, there is always my poetry blog, which comes to life every April, during the GloPoWriMo challenge. So, once a blogger, always a blogger, I suppose.
Posted by Natasa at 02:04

Email ThisBlogThis!Share to TwitterShare to FacebookShare to Pinterest
Labels: #evosessions

Many congratulations on the 10th anniversary of starting your wonderful blog!! I am delighted to read that you will be blogging more often, as I have always enjoyed reading your insightful posts and learned so much from them!

I feel honoured to be mentioned in this post. I am proud to be part of the original 2008 bloggers' club and together with you as an inspiration, I hope we will both continue blogging this year and beyond!!

It is so true, that once blogging is in your blood, it is something that will never really go away.... so it is great news that you have exciting blogging projects in store for the future, and I look forward to seeing your journey progress.

Wishing you a very happy birthday today. May all your dreams come true!!

Once again, well done on your fantastic blogging achievement today.

Thank you so much, dear Janet. Of course I mentioned you. You are the one who pulled me out of hibernation. You took the lead and I followed. Looking forward to blogging with you again.

Thank you, Karenne. I too wish you still blogged. I always enjoyed reading your posts and I miss your blog so much. Maybe you can try to make a comeback, too? I know it is hard these days and I am not planning on posting too often myself, but I'll try to post often enough to keep this blog alive.