A picture tells... how many words again?

In Teacher Challenge number 5 we were asked to reflect on the role images play in blogging. Now, that is very convenient because I am also attending Digital Storytelling and last week we did Flickr stories.

I keep saying that multitasking is useful. The fact that I am involved in multiple workshops right now means two things:

1. My head is expanding very fast and it might explode any minute.

2. All I need to do is sit back and enjoy and the workshops will take care of each other's homework.

Don't ask me how many workshops I am attending, never ask a lady about the number of her workshops.

Anyway, here is what we did in Digital Storytelling last week:

1. Object Stories
We were asked to post an image of an object that means a lot to us and to write a short story about it underneath a picture. This is what I shared: These earrings belonged to my maternal grandmother. She got them from her maternal grandmother when she was a little girl. In a way, they are a link to my female relatives.
I know the picture is not very good and it is a pity. The craftsmanship is really beautiful. The earrings are flower-shaped and the blue petals are made of turquoise, which happens to be my favourite stone.
A long time ago I decided I was going to wear them. They were different from anything my friends had. I wore them constantly for 20 years. The clasp is very strong and it was hard to remove them even when I wanted to. Until about a week ago when I lost one of them. I was really unhappy, but two days later it was found.
I was under the impression that my female ancestors were trying to tell me something.
What could that be?

The response I got from other participants was the best part of this activity. No matter which part of the globe they came from, most ladies could feel the pain I felt when I lost my earring. They understood why the earrings were so important to me. My apologies for the picture - it is not easy to capture a pair of tiny earrings and I am not much of a photographer.

I read a lot of fascinating stories about ordinary everyday objects. It is easy to apply this in an EFL classroom. Everybody has a favourite object and everybody can tell stories about it.

2. Colour Stories
We were asked to post an image in which our favourite colour dominated and to write a short story about it. We were allowed to use Flickr Creative Commons images. This is what I came up with: His heart is red,
open for everyone to see.
He leaves red footprints
all over the sky
as he sinks into sleep.
One last flicker of fire
and he is gone,
invisible to us,
as he dreams his red dreams
at the bottom of the sea.
He wakes up, red,
the next morning.
He lights the sky
with his red love
and she stretches
her red-sleeved arms
to embrace him.

Images inspire us. If you don't know what to blog about, just find a beautiful image (with a CC licence), post it at the top of your blog, look at it and start writing. Words will come. I have done this exercise with some of my students who claimed they were bad at writing. I would put a photo cut out of a newspaper in front of them and asked them to describe how in made them feel. If words still wouldn't come, I asked them to describe the photo. I believe it helped. The trick is to use interesting images like the one above.

Before I move onto Activity Number 3, I have got something else to share with you. One of the tasks in Teacher Challenge was to use an Animoto video and I love Animoto, so I just had to make one. Here it is.

I swear, if I didn't know better, I would think that the Animoto people knew the secret of Artificial Intelligence. Animoto puts each image right where it should be and it is in sync with the music... I love it. And, instead of just sharing family photos, you can tell all sorts of stories with Animoto. It just takes a bit of imagination.

Finally, Task Number 3 in Digital Storytelling were Six Word Stories. We were asked to share an image (our own or a Creative Commons one) and to invent a six word story to go with it. Six word stories are addictive. People shared and shared. I made three, but only one of them is with the image of my own. That's the one I am going to share here: 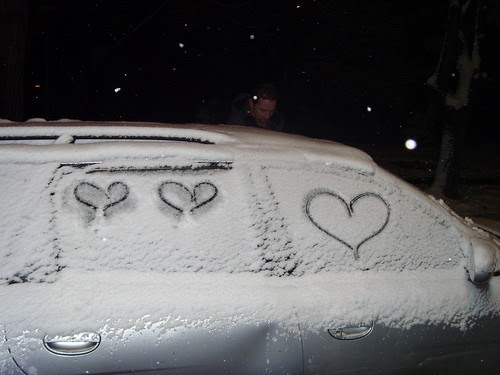 The love will outlive the snow.

The great thing about images is that they can be reused. In the Teacher Challenge number 5 we were asked to create a five-word story. So, here it is, with the same image:

The sun will melt them.

And my question for you:

Which story do you prefer?

The one with the Hollywood ending...

or the other one.

Hi Natasa, I am also doing both workshops - the blogging challenge and the digital story telling challenge. I am finding that the are complimenting each other and reinvigorating my passion for both blogging and discovering new web 2.0 tools. Our school year starts back next week, so it is great to have some new tools up my sleeve.

I enjoyed reading your fascinating accounts of the 2 workshops you have described here. I'm also enjoying the Digital Storytelling course very much and I hope to write up some impressions of it soon.

I love your Animoto - it's fantastic the way Animoto arranges everything so beautifully for you, with the images and music.

I love this post, especially as although I signed up for the digital story-telling course, I've had so much work to do (and get over the flu) that I've not managed to keep up :-((.

I love finding pictures for my blog but I have to confess that what I like best is first writing my post and then I try to get either a "feel" for what I was writing about and find a matching picture or sometimes try to find pictures that actually tell an alternative opinion/ add a bit of humour or just simply things that tell my story in a more profound way. Sometimes, of course, they're just pictures that relate directly... but often,m I spend a ridiculous amount of time on the picture search part of my blogging - it's something I always do despite the time though, because I think it adds so much - is the story.

Hi margm. What's the link to your blog? I visited your profile and saw the links to the blogs you follow, but I am not sure which one is yours. Yes, I agree. Blogging is a way to tell a digital story. I am between semesters and, though I have a lot of obligations at work, it feels like a holiday.

Hi Janet. Yes, I am enjoying Digital Storytelling too. Right now I am a little overwhelmed by all the possibilities and tools shared in Week 3. I would like to try them all, but that would take me a year.

Karenne, I hope you are feeling better. I hate flu, it leaves you completely drained.
I know you find images as important as I do when it comes to blogging. I can relate to "I spend a ridiculous amount of time on the picture search part of my blogging". I do too:)

Hey Natasa, you have inspire me. I am going to do an animoto or slideshare of Christmas time with my family after seeing your birthday celebrations. I think both students and colleagues like to know what you do outside of school and as one of the advanced bloggers said in her post 'I don't live in the cupbard at school, you know!"
I loved all the stories you told about your photos/images. Thanks for sharing!
Talk about a pounding head that is about to split open! Mine is just about to do that after reading everyone's posts in this challenge. It has been great for us all to share our learning.

Anne, I can't begin to imagine what it's like for you. We just need to write our posts, you have to be the glue that's holding us together. It has to be really hard.
I am looking forward to seeing your Animoto.
By the way, I am going to be absent next week and I have slowed down on the challenges, but I am not giving up. No way. I'll continue where I stopped when I come back.

Great Digital Storytelling ideas. I will definitely give some of these a try. Thanks for sharing what you have been learning.

Thank you, Karla. You are doing great too.