Your Magic Carpet Is Here 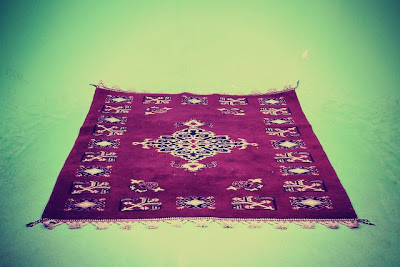 It is Week 6 in Camp Magic McGuffin and I am running out of time, since I am travelling on Sunday and will be away during Week 7. Still, I have managed to finish my main assignments. I have created a radio bumper for the show I am collaborating on with other members of Slaughterhouse 4. I have also finished my 5 minutes of the show. I wish I could have worked more on it, but there was no time.

At my bunkhouse we chose travel as our main topic and the title of the show is A Tourist's World. That's why I decided to play with the magic carpet metaphor. I recorded my voice in Audacity, then used sound effects to make my speech faster and my voice deeper. My idea was to sound a little like a British butler. Then I uploaded the Audacity files to Myna and continued editing the bumper. I chose the tracks from the Adventure section in Myna and I almost happy with it. At least, I like it much better than my last week's bumper, but then that means that I am learning. Here it is:

So, fasten your seat-belts and listen to Slaughterhouse 4.